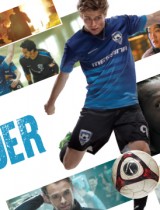 This sports drama is devoted to a sports team from Montreal. All the members of the team began their career in this city. As is clear from the plot, the life of a sportsman is not just playing matches. It involves various experiences: sadness and happiness, unexpected revelations and quarrels sometimes leading to serious animosity between the players. This stressful environment puts the team’s integrity at risk. Despite being of different ages, races and having contradictory opinions on many things the players have one goal – becoming a united team.