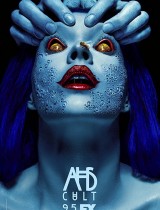 Allyson Mayfair-Richards is the main character of this long-awaited continuation of American Horror Story. She suffers from post-traumatic stress disorder. Ally has three phobias – she is afraid of clowns, the sight of blood and clusters of small holes or bumps. Thanks to her wife Ivy Allyson she had learnt to cope with her fears, but the Donald Trump’s victory on U.S. 2016 presidential elections intensified them again. When Ally tells her wife about clowns who threat her, inspired by ideas of “The clockwork orange”, Ivy thinks that this is a result of psychosis. The lack of support gives Allyson a reason for trying to defend her family on her own.