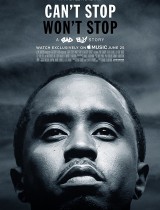 The documentary movie “Can’t Stop, Won’t Stop: A Bad Boy Story (2017)” will tell about formation of Puff Daddy as a producer, about creation of a mark of Bad Boy Records. Also, it is about tragic murder of Biggie Smalls. You are waited by interviews and memoirs from Puff, Nas, Jay-Z, Lil Cease and others. Another part of this movie is devoted to a concert “Bad Boy Family Reunion Tour” which passed in 2016, on May 20th – 21st. It was performed in the sports arena “Barklays-center” in Brooklyn (New York). Cameras will watch Puff Daddy when he meets participants of Bad Boy Family during 2-week rehearsal before concerts.