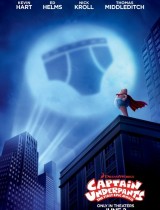 This animated comedy is a perfect choice for parents who want to spend an evening with their kids, laughing wholeheartedly. The story is about two boys and their merry adventures. George Beard and Harold Hutchins are classmates, best friends forever and notorious pranksters. One day they are called to their grouchy principal’s office, which is never a good sign. It turns out that cruel Principal Krupp is going to separate George and Harold by sending them to different classrooms! To ruin this evil plan, George has to hypnotize Krupp.