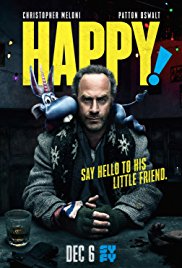 The American fantasy series “Happy!” is shot on a series of comics and tells about a tough policeman who left his job long ago. Now he drinks alcohol and earns money by contract killings. On one of the orders, the protagonist gets seriously injured and after he regains consciousness he begins to see the toy blue summer unicorn in front of him. But this is not a hallucination …