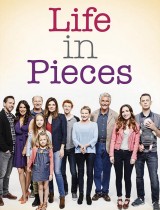 Life of Pieces tells a story about the Short-Hughes family, where three different generations learn to get along with each other. Like in any other family there are problems between the members,the series show an extensive family portrait that sheds light on the life of the Short-Hughes.
John is a retired pilot, who lives with his wife Joan, a psychotherapist who likes to interfere in the lives of their children. Her children struggle to keep a good relationship with their mother, tired of her being so commanding and strict. The family members try to have good relationships with each other and to live a stable life coping with everyday Problems