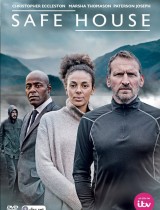 After working a long time of work for the police a married couple decides to settle down and find inner peace. They attempt to change their lifestyle and move outside of the city to a cosy house by the lake. But it doesn’t come as easy as it seems when a former colleague asks for their help. Their task is to provide security for people in danger and who are chased from criminals. After a long time of thinking they give in and help their friend out. After trying to keep the people safe they find themselves involved in trouble when a couple of criminals begin to spy on them. Along with that the couple faces trust issues when they realize that their partners have secrets from one another.