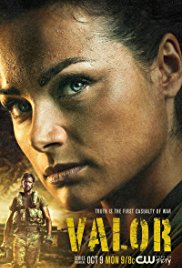 Military drama series “Valor”, in the center of which is one of the first in the American army women piloting a military helicopter. This is a story about one secret failed mission, where the personal tragedies of ordinary servicemen and a large-scale conspiracy involving the country’s top officials were intertwined. Events are developing against the backdrop of a new task – an elite squad of military pilots have to go in search of missing soldiers. A pilot missing in Somalia is in the hands of terrorists and the main character is making every effort to persuade the commander to return for him.